Immigration - What they're NOT telling you.

Caution:
Put on your sunglasses.
The light will be going on!

If you follow any news at all you know very well that the globalist elite leaders have been trying their best to destroy western civilization for the past 6 years or more with uncontrolled immigration.  Volumes have been written on that subject and that's not the point of this article.

Put aside the politics, the globalist agenda, the social ramifications, the economic arguments for cheap labor and all that rhetoric a moment.  You know all that already.  Books can be written on that and have been.

Now, shift your mindset to what we are learning and what we know (or should know) about how the Birth Certificate is the first of multitudes of documents created in YOUR NAME, with full faith and credit, which are converted into security instruments and each one is traded in the financial markets for millions of dollars apiece!

Now, look at all those nice people, coming in waves over the border with warm Homeland Security buses waiting to take them to their new homes in the breadbasket of the USA.  Welcome!  Come one!  Come all!

Aside from the social engineering benefits to destroy the western world, here's why....

If you were a globalist, you'd be thinking that each one of these nice people is going to have a;

And really, who cares if they are criminals and will terrorize, kill and maim others?  Our eugenics plan with vaccines, gmo's, chemtrails, big pharma and the AMA,  will get them sooner or later anyway, so that doesn't matter!  Think of the trillion$ we can make off of the millions of immigrants, legal or otherwise and all the securities they will generate for us!  Come!  We have Nice apartments with food, liquor, tattoos, and big screen TV's for you.   No problem!

Our members are learning how to tap into these 'stolen securities' which are worth millions and flip from being the 'debtor and surety' to answer to all 'charges' and instead become the 'creditor and beneficiary' and reclaim those accounts, so we can 'at least' live as well as the immigrants!  (if not a whole lot better!)

Knowledge is Power.  Grab it while you can!   Join the law club! 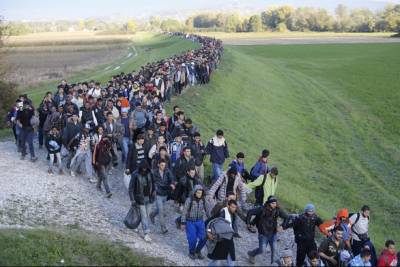