Things aren't adding up if you ask me... 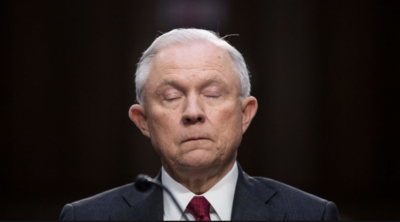 I'm going to go on record with what I've been saying for a long time.  People all over are calling for Jeff Sessions to resign.  He's not done anything to drain the swamp, etc. etc.

Could it be, just on a wishful hunch (or perhaps more) that they (Trump, Sessions & DOJ) are giving the appearance of 'foot dragging' or even 'protecting' as  'sleight of hand' in order to buy time, when in the course of the master plan it would be ill advised to release too much too soon and they already have all they need (ropes included) to nail these demons in one fell swoop 'at the proper time'.  You don't start the drama until 'the stage is set'.    Just because Judicial Watch doesn't have what they want from their court document requests and FOIA's, doesn't mean that the entire dossier isn't sitting on top of Trump's desk in the study of his residence in Mar Lago.

Everyone knows that the DOJ and FBI are full of deep state plants, spies and operatives.  Only an 'unqualified, mentally unstable' idiot would operate out in the open showing his hand to his admitted enemies.  But hey 'dim(dem)-wits!  History will show that Trump is the most intelligent and proAmerican president since George Washington!  Mark my words whether you want to admit it or not!

Think about this... People were horrified when Sessions was beefing up 'asset forfeiture and seizure laws' last year.  Is it coincidence that Trump's executive order of a couple weeks ago, declaring national emergency with authority to seize all assets involved in corruption and human trafficking rests to a large degree on 'Asset seizure and forfeiture'?  Hmm.  Do you think there might be a link there?

Is it likely that one of Trump's first appointments in Jeff Sessions, would be so inept and even contrary to Trump's campaign promises which he vowed to honor for the American people and Trump just blissfully ignores the 'apparent' incompetence relating to a matter which is central to the survival of the country?   Is it even in the realm of logic, competence and coherence that Sessions is more pre-occupied with marijuana (as he appears)  than he is about the internal takeover of our country leading to it's permanent death if he fails?  It doesn't add up.  something else is going on.  I'm betting on the fact that we're going to see the biggest and most successful 'sting' operation in the history of the world. I'm getting my blanket and popcorn to get a good seat for the fireworks!

Sun Tzu is quoted in his famous 'Art of War':  "Pretend inferiority and encourage his arrogance"

And remember Teddy Roosevelt's famous quote... "In politics...there is always a reason for circumstances to exist!"