Excerpt of Article by Jeff Thomas in The INTERNATIONAL MAN

The Bank is Being Robbed! 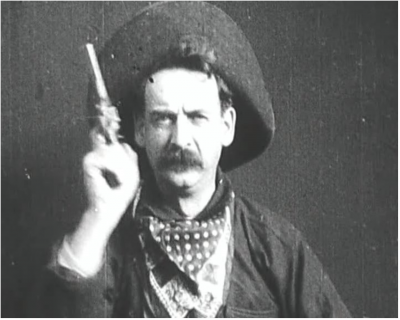 In 1903, the desperado in the image above appeared in an early film about a robbery. He was the classic guy in a black hat and, of course, he was eventually foiled by the guys in the white hats.

That was a simpler time.

Today, law enforcement is assisted so much by modern technology that the guys in the black hats rarely try to rob a bank, as they’ll almost surely be caught.

So, does that mean the end of bank robberies? Well, unfortunately, no. In the future, we’re likely to witness bank robberies on a scale such as we’ve never before witnessed.

The difference is that they’ll be robbed by the guys in the white hats. And, the kicker is that the laws of the land will be entirely in their favour. It will be legalized robbery.

In 2013, the world saw its first “bail-in,” in which the banks of Cyprus confiscated the deposits of many of their clients. There was no warning and there was little in the way of explanation, except to say that it was “necessary.” What that really meant was that the banks had been mismanaged to the point that, unless the deposits were confiscated, they would fail.

Under the guise of “assuring the security of the institution of banking,” the banks were robbed by the bankers themselves.

Learn More on how to foil the bank robbers!!  Click HERE