This is the face of evil in our country!

The democrats have openly denied God!

Tuesday night President Trump gave his first speech to a joint session of Congress which was seen and lauded by millions and millions around the world.  You've seen the reviews and commentary on it so I won't rehash the commentary other than to make note that, even his honest detractors had to admit that it was a spirit filled and unifying speech.  Pundits on both sides of the aisle made a special note that the most unforgettable moment in the history of presidential speeches was the nearly 2 minute, emotional, standing ovation giving honor to the sacrifice of a fallen Navy SEAL, while his surviving wife stood in the gallery with uncontrollable emotion and tears streaming down her face.  Even one of his most ardent 'Never Tump' adversaries, Obama minion of division and strife, Van Jones said, "This was the moment Donald Trump became president."

Who could deny this moment of raw emotion, honor and sacrifice?  Who could resist paying homage to a family who has paid the ultimate price for their country?  The democrats, that's who!   This shot below was taken during this memorable and historical moment and you can see them refusing to stand to give honor where honor is so clearly due! 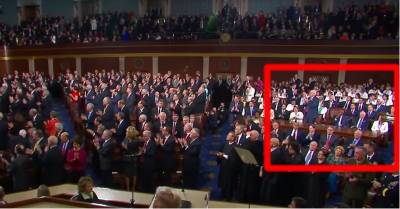 Trump:  "We are one people with one destiny.  We all bleed the same blood.  We all salute the same great American flag.  And we all are made by the same God!"

Roaring applause ensued from the Republican side of the chamber.  Again, democrats, sitting on their hands refusing to acknowledge the obvious.

You likely are aware of the biblical scripture in which Jesus says, "Whosoever shall deny me, I shall also deny them before the Father."

All I can say is... may they repent while they still can!

Here are some other points and issues the democrats refused to acknowledge or applaud, for anyone who is keeping score (I was)....

Folks, this is historic.  We are watching the democratic party alienate themselves from not only their constituents who have any active brain matter still functioning, but also from their own party and the people of the nation.  The democratic party is dissolving like an Alka Seltzer tablet in water, right before our very eyes!  They have lost over 1000 seats in state and national houses of government since 2009 and they just keep digging themselves deeper, and deeper and deeper with every lie they can come up with.

To oppose the concepts as outlined above is simply to oppose the idea of peace and prosperity for humanity.  There is no other way to look at it.

- Nancy Pelosi has remarked just recently that George Bush is still president and thinks we have to pass laws to find out what's in them.

- Chuck Schumer said this week that President Trump hasn't done anything so far to live up to his promises.

- Another democrat in the House, whose name I can't recall, thinks that if an island gets too populated, it could capsize! It's on video and he was serious!

- All democrats think that if you are critical of them, 'You are a Russian agent'!

All of this is comically ludicrous and one can only wonder...who could possibly support these people?

But the fact that they have denied God in front of the world, is startling and horrifying.  There is only one entity who hates humanity so badly that he wants not only to destroy it but also to create as much pain and anguish to God's people as he can.  This is Satan himself.

And we are staring at his coveted minions, face to face, in this photo above.   This is the face of evil incarnate.  If you are a supporter of these people, you seriously need to re-think your position and pray to God for forgiveness.

Share this article.  Raise it up in discussion.  Let people know what is really happening here.

We're not talking politics.  We're talking about your eternity!