You No Longer Have Any Excuse!

Defending Freedom is a Personal Responsibility

As Benjamin Franklin was walking out of Independence Hall in Philadelphia after signing the new constitution for the united States of America he was asked, "What have you brought us?"  As you know, he replied, "A republic,  if you can keep it!"

Those words are so telling.  Folks, the world has just been pulled back from the brink of losing the last bastion of freedom, the last hope for the world as it has come within an inch of it's life in the recent election.  If it weren't for purely divine providence and protection to deliver president elect Trump from the onslaught of lies, deception, trickery, theft, fraud and other dastardly deeds, America right now would already be lost forever.  With it, would be the hope for freedom in the rest of the world.  Folks, we came within a breath of the death for freedom, and we're not out of the woods yet.  There is much work to be done.  The battle is only 'engaged'.   It is not by any means, over!

Trump is only one man.  He is emblematic of a global movement, as is Nigel Farage and others.  A general is nothing without an army to lead.  To win this war each of us needs to take on the mantle of 'truth warrior' and stand up and defend our inherent God given rights to life, liberty and prosperity.  There are still minions of evil in every corner in your local area.

This is where you come in.  We each must be engaged on the battlefield of ideas and help each other to strengthen our knowledge and intellectual capacity to be able to defend freedom and our futures, individually and collectively.

I can help you in that regard.  The Law Club has created an App which every freedom loving prosperity seeker must have on their phone.  Whenever you hear someone complain about; that traffic ticket they just got, those exorbitant taxes, being charged for victimless crimes, being unjustly accused, imprisoned, fleeced, fined or f*cked with...that's an open door to have them get this App and start learning how to deny the unjust enrichment of the corporate government at our expense and put a wrench in the gears of the grist mill which chews each of us up on a daily basis.

Want freedom?  Get this App!  Share it with everyone you know.   Give it your rating and write a review and lets get on that battlefield.

Now, YOU HAVE NO EXCUSE NOT TO!

Search for 'My Liberty' App. in the Apple iTunes App Store

For Android, Click Here   or search for it in Google Play Store 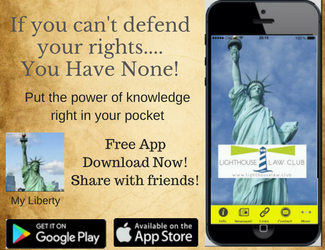